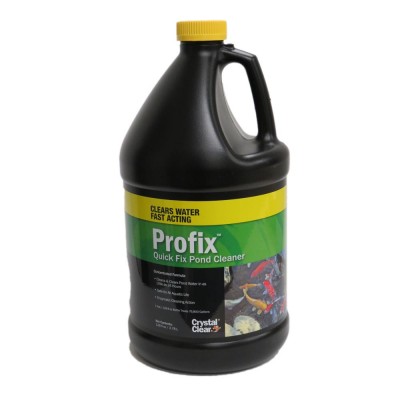 1 reviews  |  Write a review
Share
Description Reviews (1) Related Products (10)
ProFix® - Complete Pond Cleaner Contains A 9% Solution For Rapid Action. ProFix is the new name of the popular D-Solv9 and has the same formula and, like D-Solv9, clears pond water regardless of color and removes suspended organic debris. ProFix® is formulated to be stronger, work faster and more economical per treatment than any similar product on the market today. Use ProFix® in the early Spring and hot Summer months when pond water begins to change due to photosynthesis and nutrient loading. Treating discolored pond water has never been easier.

ProFix is the new name of D-Solv9. It was re-named by the manufacturer.
The formula is the same, only the name has changed.
ProFix™ has a specifically designed formula to clear pond water quickly and efficiently regardless of water volume. ProFix™ can be used in water gardens, fountains, bubblers and streams. When using ProFix™ always make sure there is vigorous aeration using a waterfall, bubbler, fountain, air stone or spitter. ProFix™ requires heavy aeration especially in hot weather.

Shake well before use. ProFix™ should only be applied a maximum of once per week at the prescribed rate. When using ProFix™ always make sure there is vigorous aerating using a waterfall, bubbler, fountain, air stone or spitter. ProFix™ requires heavy aeration especially in hot weather.

Designed to be a “Quick Fix” it is recommended that CrystalClear® ClarityMax™ be used after ProFix™ treatments for best results.

Do not mix or use other water treatments while treating with ProFix™.

Muck Off™ Sludge Reducing Pellets for Ponds by Crystal Clear®
$62.75
Add to Cart